Home Education Technology What Is Calculator ? History Of Calculator .

As calculators are use to solve the mathematical problems or calculations. Hence we can define the calculator as a hardware device which is used to performe arithmetic operations such as addition , subtraction , multiplication , division and some other operations. 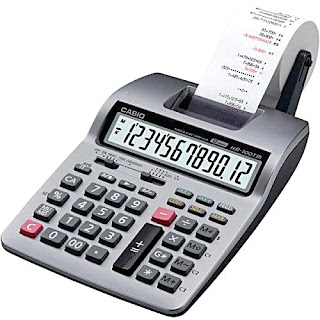 Calculators were  using in beginning known as abacuses, Abacuses were constructed by using wooden frame , beads , wires. In Abacuses the wires were tightly fixed under a wood frame and beads  slided over the wires . Abacuses were in use for centuries Untill the written Arabic numerals system invented and are still widely used by merchants and clerks in China and elsewhere.

In 1623 Wilhelm Schickard invented Calculating Clock which was the first  automatic calculator .

In 1643, Blaise Pascal , a  French philosopher invented the calculation device which is known as the Pascaline, which was used for taxes in France .

In 1799 ,G.W.v. Leibniz ,The German philosopher buit a calculating machine.

From the 1930s to1960s, mechanical calculators dominated the desktop computing market (see History of computing hardware). Major suppliers in the U.S. included Friden, Monroe, and SCM/Marchant. These devices were motor-driven, and had movable carriages where results of calculations were displayed by dials. Nearly all keyboards were "full"—each digit that could be entered had its own column of nine keys, 1 through 9, plus a column-clear key, permitting entry of several digits at once. One could call this parallel entry, by way of contrast with ten-key serial entry that was commonplace in mechanical adding machines, and is now universal in electronic calculators. (Nearly all Friden calculators had a ten-key auxiliary keyboard for entering the multiplier when doing multiplication.) Full keyboards generally had ten columns, although some lower-cost machines had eight. Most machines made by the three companies mentioned did not print their results, although other companies, such as Olivetti, did make printing calculators.

In these machines, Addition and subtraction were performed in a single operation, as on a conventional adding machine, but multiplication and division were accomplished by repeated mechanical additions and subtractions. Friden made a calculator that also provided square roots, basically by doing division, but with added mechanism that automatically incremented the number in the keyboard in a systematic fashion. Friden was the only company that made a calculator with square root. Handheld mechanical calculators such as the 1948 Curta continued to be used until they were displaced by electronic calculators in the 1970s.

In 1954, IBM demonstrated a large all-transistor calculator and, in 1957, they released the first commercial all-transistor calculator (the IBM 608). In early 1961, the world's first all-electronic desktop calculator, the Bell Punch/Sumlock Comptometer ANITA (A New Inspiration To Arithmetic) Mk.VII was released. This British designed-and-built machine used vacuum tubes in its circuits and cold-cathode Nixie tubes for its display. This model was somewhat error-prone, and was replaced in September 1961, with the much more successful Mark VIII version. The ANITA had a full keyboard, and was, very likely, the only such electronic calculator. It was superseded technologically in June 1963, by the Friden EC-130, which had an all-transistor design, 13-digit capacity on a 5-inch CRT, and introduced reverse Polish notation (RPN) to the calculator market for a price of $2200, which was about triple the cost of an electromechanical calculator of the time. In 1964, Sharp introduced the CS-10A, also an all-transistor desktop calculator, which weighed 25 kg (55 lb) and cost 500,000 yen (~U.S.$2500).

The Facit, Triumphator, and Walther calculators shown below are typical European machines. Similar-looking machines included the Odhner and Brunsviga, among others. Although these are operated by handcranks, there were, of course, motor-driven versions. Most machines that look like these use the Odhner mechanism, or variations of it. The Olivetti Divisumma did all four basic operations of arithmetic, and has a printer. Full-keyboard machines, including motor-driven ones, were also used in Europe for many decades. Some European machines, probably rare, had as many as 20 columns in their full keyboards.
Facit NTK (1954)
Triumphator CRN1 (1958)
Walther WSR160 (1960)
Olivetti Divisumma 24 (1964)
1970s to mid-1980s

By the 1970s, the slide rule became obsolete and passed out of existence as the calculator of choice.

In the early 1970s, the Monroe Epic programmable calculator came on the market. A large desk-top unit, with an attached floor-standing logic tower, it was capable of being programmed to perform many computer-like functions. However, the only branch instruction was an implied unconditional branch (GOTO) at the end of the operation stack, returning the program to its starting instruction. Thus, it was not possible to include any conditional branch (IF-THEN-ELSE) logic. During this era, the absence of the conditional branch was sometimes used to distinguish a programmable calculator from a computer.

The first Soviet-made pocket-sized calculator, the "Elektronika B3-04," was developed by the end of 1973, and sold at the beginning of 1974.

The first low-cost calculator was the Sinclair Cambridge, launched in August 1973. It retailed for £29.95, or some £5 less in kit form. The Sinclair calculators were widely successful because they were far cheaper than the competition; however, their design was flawed and their accuracy in some functions was questionable. The scientific programmable models were particularly poor in this respect, with the programmability coming at a heavy price in transcendental accuracy.

The first Soviet scientific pocket-sized calculator, the "B3-18," was completed by the end of 1975.

In 1973, Texas Instruments (TI) introduced the SR-10, (SR signifying slide rule) an algebraic entry pocket calculator, which was later followed by the SR-11 and eventually the TI-30.

The first programmable pocket calculator was the HP-65, in 1974; it had a capacity of 100 instructions, and could store and retrieve programs with a built-in magnetic card reader. A year later the HP-25C introduced continuous memory, i.e. programs and data were retained in CMOS memory during power-off. In 1979, HP released the first alphanumeric, programmable, expandable calculator, the HP-41C. It could be expanded with RAM (memory) and ROM (software) modules, as well as peripherals like bar code readers, microcassette and floppy disk drives, paper-roll thermal printers, and miscellaneous communication interfaces (RS-232, HP-IL, HP-IB).

The two leading manufacturers, HP and TI, released increasingly feature-laden calculators during the 1980s and 1990s. At the turn of the millennium, the line between a graphing calculator and a PDA/handheld computer was not always clear, as some very advanced calculators such as the TI-89 and HP-49G could differentiate and integrate functions, run word processing and PIM software, and connect by wire or IR to other calculators/computers.

In March 2002, HP announced that the company would no longer produce calculators, which was hard to fathom for some fans of the company's products; the HP-48 range in particular had an extremely loyal customer base. HP restarted their production of calculators in late 2003. The new models, however, reportedly didn't have the mechanical quality and sober design of HP's earlier calculators, for which HP calculators were once famous (instead featuring the more "youthful" look and feel of contemporary competing designs from TI). In the early days of the calculator, HP sales reps were famous for starting demonstrations by slamming the calculator on the floor.
Category: Education  Technology