Home Technology What Is Malicious Software ( Malware ) ? How It Affects Our Device ?

What Is Malicious Software ( Malware ) ? How It Affects Our Device ?

Malware is short form of Malicious Software . Malware is a specifically designed software to affect the performance of computer and slowing down the processing speed of computer
.Malware is an umbrella term used to refer to a variety of forms of hostile or intrusive software.The Malware can be present in the form of executable code, scripts, active content, and other software.We can define a Malware on the basis of its malicious intent, acting against the requirements of the computer user - and so does not include software that causes unintentional harm due to some deficiency.
The Programs that are officially provided by companies can be considered as malware iwhen these programs work secretly against the interests of the computer user. An example of these type of malware is the Sony rootkit. In Sony roolkit a Trojan embedded into CDs sold by Sony, which silently installed and concealed itself on computers of purchasers with the intention of preventing illicit copying; it also reported on users' listening habits, and unintentionally created vulnerabilities that were exploited by unrelated malware. 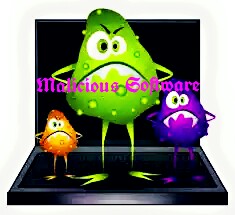 There are following types of the malware that works against computer programs and damages our computer. These types of malware are :-

Computer Virus is a type of malicious software program that when enter in our devce it starts to spread itself across our system through creating copy of itself by modifying the programs of computer and inserting its own code .

Trojan Horse or Trojan is a type of malicious software which is designed to hack into the computer by misleading the user .  Trojan Horses are designed by inspiring to the Greek's story of wooden horses .

A computer worm is a self-replicating computer program that penetrates an operating system with the intent of spreading malicious code. Worms utilize networks to send copies of the original code to other computers, causing harm by consuming bandwidth or possibly deleting files or sending documents via email. Worms can also install backdoors on computers.

Spyware is a type of spyware which when installed on our system then it started to gather the information of user of computer without their knowledge and send the informations to another entity .  Spyware is hidden from the user in order to gather information about internet interaction, keystrokes (also known as keylogging), passwords, and other valuable data.


For Complete Detail Please Click On Link :- What Is Spyware ? Types Of Spyware and Effects Of Spyware .

Adware, or advertising-supported software, is any software package that automatically renders advertisements in order to generate revenue for its author. The advertisements may be in the user interface of the software or on a screen presented to the user during the installation process.

For Complete Detail Please Click On Link :- What Is Adware ? Different Types Of Adware .

For Complete Detail Please Click On Link :- What Is Rootkit ? Different Types Of Rootkits .

Ransomware is a type of malicious software from cryptovirology that threatens to publish the victim's data or perpetually block access to it unless a ransom is paid. While some simple ransomware may lock the system in a way which is not difficult for a knowledgeable person to reverse, more advanced malware uses a technique called cryptoviral extortion, in which it encrypts the victim's files, making them inaccessible, and demands a ransom payment to decrypt them.

For Complete Detail Please Click On Link :-  What Is Ransomware ? Different Types Of Ransomware .

Scareware is a form of malware which uses social engineering to cause shock, anxiety, or the perception of a threat in order to manipulate users into buying unwanted software. Scareware is part of a class of malicious software that includes rogue security software, ransomware and other scam software that tricks users into believing their computer is infected with a virus, then suggests that they download and pay for fake antivirus software to remove it.

For Complete Detail Please Click On Link :- What Is Scareware ? Effects Of Scareware .

A developer who develope these Malware that use a variety of means to spread the malware across devices to infect devices and networks.A Malicious software contain the variety of malicious programs that can be easily delivered physically to a system from the use of a USB drive or other means. Malware can also spread across device  through the internet through drive-by downloads, these malware if once enter in a system than it automatically download the malicious programs into the users' system without their approval or knowledge. These can enter in user's when a user visits a malicious website, for example. Phishing attacks are another common type of malware delivery; emails disguised as legitimate messages contain malicious links, or attachments can deliver the malware executable to unsuspecting users. Sophisticated malware attacks often feature the use of a command-and-control server that allows threat actors to communicate with the infected systems, exfiltrate sensitive data and even remotely control the compromised device or server.


Malware are not only designed to fool users, but it also making fool to security administrators as well as antimalware products . Some of these evasion techniques rely on simple tactics, such as using web proxies to hide malicious traffic or source IP addresses. More sophisticated threats include polymorphic malware, which can repeatedly change its underlying code to avoid detection from signature-based detection tools; anti-sandbox techniques, which allow the malware to detect when it's being analyzed and delay execution until after it leaves the sandbox; and fileless malware, which resides only in the system's RAM in order to avoid being discovered

As discused above that Malware basically affects our system and slow down the performance  speed of our system and now we consider about following terms to find our system get affected by malicious software :-

Each type of malware has the tendency to slow down your operating system, your Internet speed or the speed of your applications.Hence when our system get affected by malware then system works slow in comparison to before the malware attack.

The most remarkable signs of malware is present in the form of unwanted pop-up windows. The Unexpected advertisements were pop-ups which appear on the system are a typical sign of a spyware infection.

Aceess Of Unwanted Sites Without Any Input :-

If you notice that your disk continues to exhibit excessive activity even when you don’t use it and there is no program or download running at that moment, this could be the right time to check your system for malware.

Why Malware is Used :-

◆ Mostly Malware is used by both black hat hackers and government for their basic purposes. Some purposes for using malware are listed  below :-

◆ By the black hat hackers Malware is used broadly against government or corporate websites to gather guarded information,or to disrupt their operation in general.

◆ Some malware is used to generate money by click fraud, making it appear that the computer user has clicked an advertising link on a site, generating a payment from the advertiser.

◆ Malware affects an infected computer in some way, and demands payment to reverse the damage.

◆ The criminal money-making, malware can be used for sabotage, often for political motives.
Technology