Whatsapp Delete For Everyone : Delete All Type Of Message Sent By Mistake .

WhatsApp is one of the largest messaging application which have 1 billion downloads and rated at 4.4 on play store . The Facebook-owned company has added a slew of features to make its platform more useful and fun, with Stories being one of the most popular one. WhatsApp Stories has over 250 million daily users around the world . While using whatsapp sometime we all have come across a situation where a Whatsapp message sent by mistake has led to a lot of embarrassment. While other messaging apps like Telegram, WeChat and Viber already have the option to delete sent messages from a thread, it wasn’t possible for the Whatsapp users, until now , But now whatsapp is planning to add new feature of revoke or recall button which known as Delete For Everyone . With the recall button users can detete all types of messages like GIFs, videos, texts, documents and more . 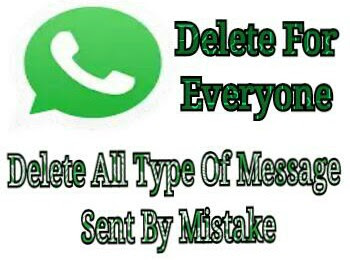 
Also Read :- Transfer Money Through Whatsapp To Friends After The Integration Of Whatsapp UPI .

Transistors - The Invention That Changed The World. History, Working And Types Of Transistor.