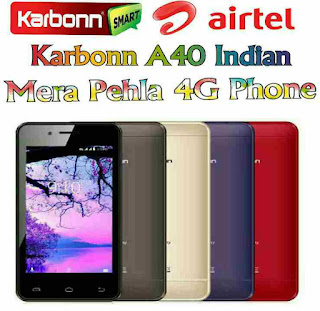 Airtel partnership with the Indian Smartphone Manufacturer " Karbonn " to launch the affordable 4G smartphone .Airtel, in a release, said that this is the first of many upcoming partnerships that the company plans to have with phone manufacturers to bring affordable bundled 4G smartphone options to the market. Under the partnership, the Karbonn A40 Indian, now comes at an effective price of just Rs 1399 Rs which is completely refundable . The original price of karbonn A 40 is 2899 but as a result of partnership of airtel with karbonn this smartphone is coming at price of 1399 Rs . To buy the karbonn A40 customers have to pay 2899 Rs and 1500 Rs will refud to the customers after 36 months.

Talking about the partnership, Raj Pudipeddi, director - consumer business & CMO, Bharti Airtel said, "As the market leader and pioneer of 4G services in India, Airtel's aspiration is to digitally empower every Indian with high speed data access. We are delighted to partner with Karbonn to remove barriers to smartphone adoption and enable millions of Indians to leapfrog to a full touchscreen smartphone experience. We plan to partner with multiple manufacturers to bring affordable smartphone options to the market and build an 'open ecosystem' of low cost devices. This is yet another step in our ongoing journey to deeply understand customers and bring innovation that delights them."


Conditions To Claim The Refund :-


Features Of Karbonn A40 Indian :-

Unlike jio 4G phone airtel phone is not a feature phone airtel phone is smartphone which manufactured by Karbonn .  The Karbonn A40 Indian comes with a 4-inch touchscreen display and runs Android 7.0 Nougat , 1.3 GhZ processor, 1400 mah battery, 1GB RAM, 8GB storage  expandable to 32GB and dual SIM slots. For connectivity, the smartphone will support 4G/3G/2G with added support for Airtel VoLTE. The phone supports 22 Indian languages and will also come pre-loaded with Airtel's apps such as MyAirtel, Airtel TV and Wynk Store  and has access to all the apps on the Google Play Store.

China's state media has made a big claim that China may have managed to catch signs of life living on another planet. A report by China's sta…