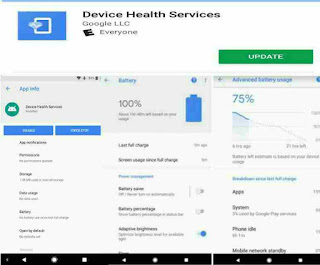 Device Health Services is improved version of previous battery application which shows on setting . And it is also the new feature which available on Android's new version named as Android Oreo . The battery application in setting shows statics about battery percentage and how long your phone’s battery will last based on your usage. Device Health Services helps in offering better statistics about battery usage on your device.Now you would able to do a few personalization options that allow you to show the battery percentage in the status bar, as well as optimize adaptive brightness. Now the new version  is1.0.2. According to features notes showing on the Play Store there are following improvement in application :-
The Device Health Services is currently not available arround the whole world . Thiis application is only available for download in USA. Hence you can download the application only if you are from USA . Unless, if you will reach to a page which show error.

After reviewing the application it seems that there is not most exciting changes from the previous version of the app. Furthermore, users which are using older devices still not able to receiving the updated Oreo battery settings interface, suggesting only under-the-hood changes to make battery usage estimates more accurate.It is seems that the Device Health Services is not a exciting update , But, it is another service that Google can now update independently of the operating system. That’s a win for everyone involved. And hey, maybe we’ll see some improvements soon like customizable battery icons and widgets.

If you are using a Nexus or Pixel device which running with Android 7.1 or higher version than Android 7.1, you would be able to see an update soon.You should keep in mind that this won't get you the improved battery screen from Oreo on Nougat, just improved 'time remaining' calculations for your battery usage.
Category: Tech News