Pre - Booking Of Jio Phone Will Start Again After Deepawali 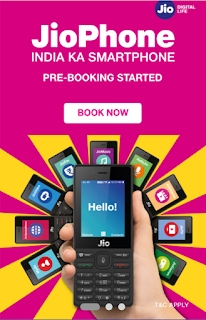 In first phase , Pre - Booking of jio phone was started in August .Afer starting the booking of jio featured phone very effective response has given by the customers around 6 million jio 4G featured phone was pre - booked by the customers in duration of evening of 24 August 2017 to early 26 August 2017 . But in this short time many costumers missed the chance to pre - book the phone , now after the diwali the remaining costumers would be a chance to pre - book the jio phone .

In terms of specifications jio phone have   2.4 inches square shape QVGA display ,jjo phone support the 4G Volte network  , phone have alphanumeric keypad  , phone also support fm radio, users can use the jio phone in all language  the jio phone is also providing SOS features  . Jio phone runs with KAI OS , All the application and services provided by jio can be use in jio smartphone. Phone gets a 2MP camera on the back, along with a VGA front shooter. JioPhone featurs 4GB internal memory, 512MB RAM and support for a microSD slot to expand internal storage.

Jio phone comes with two plans :- According to first plans uers would have to pay 153 rs per month on this recharge users will get unlimited voice calls and sms .Unlimited data with 500 MB data at high speed per day .

According to second plan , In order to broadcast their JioTV app on their television, users will have to recharge with Rs 309 per month. The monthly plan will let users watch three to four hours of video on a large screen as well. Reliance Jio has two sachet packs of Rs 24 for two days and Rs 54 per week. They come with the same benefits.

Aircel Telecom Operator partnership with the indian smartphone manufacturer lava to launch their bundled feature phone at price of 850 Rs . 850 Rs must pay when buyer will buy the phone but the buyer will get 100 % cashback after 24 months through RTGS payment method.

To unveil their Co - Branded bundled phone bsnl tied up with homegrown phone device manufacturers Lava And Micromax . According to the top executive is currently being worked out together  to launch bundled phone at price of Rs 2000 .