Google Play which is developed by Google , and most trusted one of The source to download the application on Android device . Google made several change on the play store . One of the most notable and useful change is addition of Try It Now button by using the Technology " Android Instant Application " . Android Instant Application technology makes it easy to access to the applications from search, social media, messaging, and other deep links without the stop and first install the app.

You Must Also Read :-  Google Play Security Reward Program - Get A Chance To Win 1000 $ 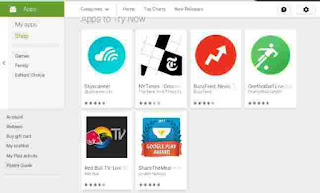 Try Now button is  part of many updates introduced by Google in play store in announcement google announced about many changes like :-

Google has announced a revamped Editors' Choice tab in Play store which is now live in 17 countries.

Google designed new home for Games featuring trailers and screenshots of gameplay. This section will introduce new sections soon – one for paid games and another for upcoming and trending games . Users will also get a reminder to try those applications which support  Instant Apps . Users will get reminder by play store to try games which recently installed by them .

Google has also introduced the Google Play Security Reward Program to incentivise security research for popular Android apps including Google's own apps. The program will allow Google to find vulnerabilities and notify developers via security recommendations on how to fix them.