Whatsapp Is Working For Rolling Out Group Voice And Video Calls .

Whatsapp , most popular social messaging application used by over 1 billion  users around the world on every kind of devices like Android , iOS , iPad etc. Whatsapp is still doing more improvements for making whatsapp  more popular and most featurable . Whatsapp already added many features such as  , Last weak whatsapp added live location sharing  feature , it also launched it's own new set of emojis . Now whatsapp  is introducing group voice calls and group video calling for their users . 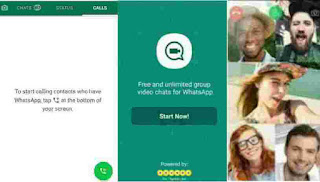 You May Also Like :- Whatsapp Introduced Whatsapp Business As Stand Alone Application

According to the information we collected from WAbetainfo's website ( a website which test all all the new introduces by whatsapp ) ,WhatsApp 2.17.70 sends a request to the server to ask if the user you are calling is in another group call , the new group voice and video calling feature would be available on in WhatsApp's next update for beta users.WABeta Info Also published on its website that -  " Note that these references we found are very strong (but they aren’t visible for you at present) and they have allowed us to understand what WhatsApp is going to add in the application, as we did for WhatsApp for iPad. "

It is also expecting that with group voice and video calling feature whatsapp will also add a new feature which will help users with an easy transition between phone numbers. Whenever any whatsapp will change their phone number then all contacts of user will get notified by whatsapp about changing of phone no.

You May Also Like :-  Whatsapp New PIP Mode Video Calling And Text Only Status Update Features .

Whatsapp is working on a feature that would be usefull for whatsapp group's administrators according to which if a group have more than one administrators than whatsapp will prevent
group creator to be deleted from the group by other administrators. This feature will also provide a option for administrators to choose other participants can modify the subject of the group, its icon and its description.

Whatsapp will also unveil Delete For Everyone Feature as soon as possible which enables the users to delete or unsend the messages sent by mistake . Whatsapp was working on the server for whatsapp delete for everyone  . The server finally works and it successfully recalls the message. It will be remotely enabled later and seen that WhatsApp 'enabled' their servers for the Delete for Everyone feature,
Category: Tech News