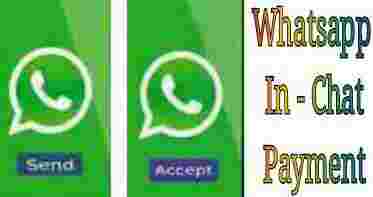 Whatsapp announced about this feature two months ago at that  time whatsapp announced that whatsapp is integrating UPI on its application through which whatsapp users would be able to transfer money through UPI Interface by using whatsapp . According to current report whatsapp has partnered with the largest three banks of India , these banks are State Bank of India, ICICI Bank and HDFC Bank, to make whatsapp pay feature most comfortably and users would be able to make transaction directly through these banks .

How Whatsapp Payment Feature Will Work ?

According to the informations we collected about whatsapp payment feature , we found that
This feature will work in similar manner as users shares the live location , contact and media files like image , video , gif or any documents through whatsapp and you will not have to leave your chat interface .


Once the whatsapp payment feature roll out for all users a new indian rupee icon will appear on attachment icon as live location sharing , gallery icons already appearing here . When users will tap on rupee icon , whatsapp will ask about the amount you want to transfer and the personal identified no. of receiver who will recieve the money  , then you will have to fill code or pin to confirm the transaction and press the send button . After completion of this process the users for which you send the money will recieve notification similarly to new message with accept or reject option.The receiver will then have an option to either accept or reject the payment.

Note :- Currently there are no.official announcement made by whatsapp payment feature . After rolling out this feature there may Difference from procedure mentioned above.