Whatsapp Officially Enabled " Delete For Everyone Feature " For Their Users

You May Also Like :- Whatsapp Introduced Whatsapp Business As Stand Alone Application 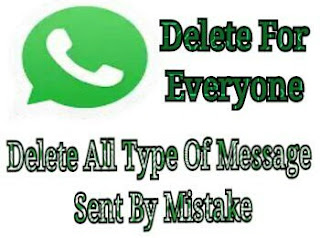 Before , when the Delete For Everyone Feature did not roll out by whatsapp  ,if any message sent by user into a wrong group or wrong chat in which they did not want to send  by mistake, the users could not do anything against it because they had not any option . Buy now those users don't have to worry anymore because WhatsApp is finally rolling out Delete For Everyone Feature. Users which are using iOS, Android, Windows Phone they have opportunity to recall there message through Delete For Everyone Feature which allowing you to definitely delete messages in chats and groups if the latest version of whatsapp isinstalled by the user . But here is a sad news for symbain phone users because WhatsApp for Symbian does not support the delete for everyone feature. So always keep remember if you will delete for everyone a message that has been delivered to a Symbian user, it won’t be revoked.

You May Also Like :- Whatsapp Is Working For Rolling Out Group Voice And Video Calls .


How Delete For Everyone Feature Works ?

Delete for Everyone feature works every type of message in WhatsApp such as text messages, images, videos, GIFs, voice messages, stickers (in future), contact cards, files, locations, quoted messages and status replies etc.If you delete any message by using Delete For Everyone Feature instead of real message a fake copy of the message which sent by users will be send to the recipient . When the recipient will read your message then not your message will be show on recipient's device , his device won’t show you the notification and user's message will also not saved by whatsapp in chat history of recipient . Whatsapp will also check if there is the ID of the message in the database , if it will find the message, the message will be correctly revoked  But for completion of whole process recipient must use the latest version of whatsapp which support Delete For Everyone Feature.

Whatsapp has started the rolling out of Delete For Everyone Feature so you may receive the activation of the feature at any time, but you should consider that the rolling out of the Delete for Everyone feature is very slow.You would be able to use this feature in whatsApp Web/Desktop since now , only if it was enabled by whatsapp for you. If you didn’t receive the activation yet, you may try to reinstall WhatsApp in order to download from the server the latest configuration, if it’s already available for you, but note that if this won’t work, you have to wait only a little more.


You May Also Like :- Whatsapp Added Granular Storage Control Feature , Control The Storage Usage By Whatsapp .

Important Points Related To Delete For Everyone Feature :-

◆  A users can only revoke the message if the receiver does not open the message for 7 minutes and you would not able to recall it in the eighth minute.

◆   A user will only be able to recall/delete the message if the recipient has not read/opened the message.

◆   For instance: if a receiver gets to read the message 1 minute after receiving it then the sender cannot delete the message even it’s within the allowed time period for deletion) after sending it.

◆   It’s not possible to delete for everyone messages sent in a Broadcast List.
Recipient must using the updated version of whatsapp which support Delete For Everyone Feature.

◆   If you want to delete for everyone a message that has been quoted, note that WhatsApp doesn’t recall the message contained in a quoted message, at the moment.

◆   Recipient must not use the symbain phone because whatsApp for Symbian does not support the delete for everyone feature,